The illustration above is of Lyra, a small constellation, quite easily identified as it appears to consist of an equilateral triangle attached to a parallelogram. The brightest star, Vega, is one of the three stars, along with Deneb and Altair that form the asterism of the Summer Triangle, which is still visible in our night sky as darkness falls
Vega is the fifth brightest star in the sky and the second brightest star in the northern celestial hemisphere, after Arcturus. It is a relatively close star at only 25 light-years from Earth, and, together with Arcturus and Sirius, one of the most luminous stars in the Sun's neighborhood.
Vega is only about a tenth of the age of the Sun, but since it is 2.1 times as massive its expected lifetime is also one tenth of that of the Sun; both stars are at present approaching the midpoint of their life expectancies.
Vega has been extensively studied by astronomers, leading it to be termed "arguably the next most important star in the sky after the Sun." Vega was the northern pole star around 12,000 BC and will be so again around AD 13,727. Vega was the first star other than the Sun to be photographed and the first to have its spectrum recorded. It was one of the first stars whose distance was estimated through parallax measurements. Vega has served as the baseline for calibrating the photometric brightness scale, and was one of the stars used to define the mean values for the UBV photometric system.
Epsilon Lyrae shown in the diagram above as the Double Double is a multiple star system .The widest two components of the system are easily separated when viewed through binoculars, or even with the naked eye under excellent conditions. The northern star is called ε1 and the southern one is called ε2; they both lie around 162 light years from Earth and orbit each other. When viewed at higher magnifications, both stars of the binary can be further split into binaries; that is, the system contains two binary stars orbiting each other.
A number of other nearby stars may also be part of the system, bringing the system to a total of ten stars. Also shown on the diagram above is the famously named "Ring Nebula" catalogued as Messier 57. It is one of the most prominent examples of a planetary nebula, the gaseous remains of red giant star that has ended its life by expelling its material into the interstellar medium. 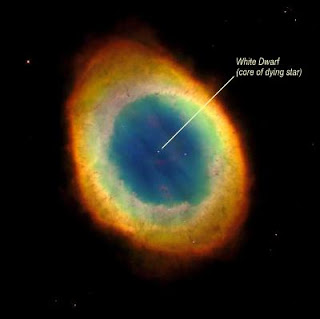 This nebula was discovered by Antoine Darquier de Pellepoix in January, 1779, who reported that it was "...as large as Jupiter and resembles a planet which is fading." Later the same month, Charles Messier independently found the same nebula while searching for comets. It was then entered into his catalogue as the 57th object. Messier and William Herschel also speculated that the nebula was formed by multiple faint stars that were unable to resolve with his telescope.
In 1800, Count Friedrich von Hahn discovered the faint central star in the heart of the nebula. In 1864, William Huggins examined the spectra of multiple nebulae, discovering that some of these objects, including M57, displayed the spectra of bright emission lines characteristic of fluorescing glowing gases. Huggins concluded that most planetary nebulae were not composed of unresolved stars, as had been previously suspected, but were nebulosities.
A planetary nebula is an emission nebula consisting of an expanding glowing shell of ionized gas ejected during the asymptotic giant branch phase of certain types of stars late in their life. This name originated with their first discovery in the 18th century because of their similarity in appearance to giant planets when viewed through small optical telescopes, and is otherwise unrelated to the planets of the solar system. They are a relatively short-lived phenomenon, lasting a few tens of thousands of years, compared to a typical stellar lifetime of several billion years.
At the end of the star's life, during the red giant phase, the outer layers of the star are expelled via pulsations and strong stellar winds. Without these opaque layers, the hot, luminous core emits ultraviolet radiation that ionizes the ejected outer layers of the star. This energized shell radiates as a planetary nebula.
Planetary nebulae play a crucial role in the chemical evolution of the galaxy, returning material to the interstellar medium that has been enriched in heavy elements and other products of nucleosynthesis (such as carbon, nitrogen, oxygen and calcium). In more distant galaxies, planetary nebulae may be the only objects that can be resolved to yield useful information about chemical abundances.
In recent years, Hubble Space Telescope images, (including the image above of M57) have revealed many planetary nebulae to have extremely complex and varied morphologies. About a fifth are roughly spherical, but the majorities are not spherically symmetric. The mechanisms which produce such a wide variety of shapes and features are not yet well understood, but binary central stars, stellar winds and magnetic fields may all play a role.