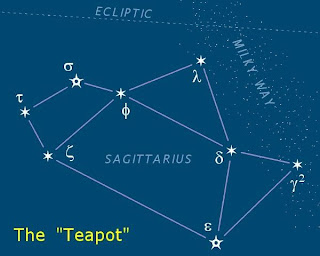 The constellation Sagittarius is clearly visible high in the south in the early evening, but will getting lower on the western horizon as October progress’.
It is one of the 12 original constellations of the zodiac, the band of constellations that lies along the ecliptic, the apparent yearly path of the sun across the sky. The modern asterism of the Teapot, formed from the constellation’s brightest stars, is illustrated above. It is much easier to discern than the classical depiction of Sagittarius, below, a centaur, half man, half beast, with a raised bow and arrow. It has been visualised this way, at least since the times of the ancient Greeks. It probably originated with the Sumerian civilisation around the Euphrates, who saw the constellation as Nergal, their archer god of war. The archer is aiming his arrow at the heart of Scorpius, the bright star Antares. 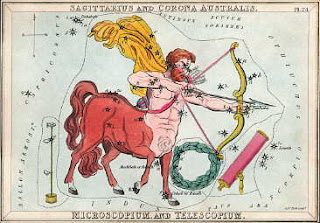 The Milky Way is at its densest near Sagittarius, as this is where the Galactic Center lies.
The Milky Way is the galaxy that contains the Solar System. This name derives from its appearance as a dim un-resolved "milky" glowing band arching across the night sky. The term "Milky Way" is a translation of the Latin for "milky road", Via Lactea, in turn derived from the Greek kyklos galaktikos or "milky circle", "milk" also being the root for the Greek word for Galaxy, Γαλαξίας (Galaxias).
The galaxy has this appearance because of the Earth's position within the galactic plane around two thirds of the way out from the center, on the inner edge of the Orion–Cygnus Arm, with the majority of the galaxy being seen edge on. The concept of this faint band of light being made up of stars was proven in 1610 when Galileo Galilei used his telescope to resolve it into individual stars. In the 1920s observations by astronomer Edwin Hubble showed that the Milky Way was just one of around 200 billion galaxies in the observable universe.
The Galactic Center is the rotational center of the Milky Way galaxy, in which we live. It is located at a distance of 27,000±1,000 ly from the Earth.
The complex astronomical radio source Sagittarius A, near the border of the constellations Sagittarius and Scorpius, appears to be located almost exactly at the Galactic Center and contains an intense compact radio source, Sagittarius A*, which coincides with a supermassive black hole at the center of our Galaxy.
Accretion of gas onto the black hole, probably involving a disk around it, would release energy to power the radio source, itself much larger than the black hole. The latter is too small to see with present instruments. Because of interstellar dust along the line of sight, the Galactic Center cannot be studied at visible, ultraviolet or soft X-ray wavelengths.
The available information about the Galactic Center comes from observations at gamma ray, hard X-ray, infrared, sub-millimetre and radio wavelengths.
Easily visible to the naked eye, however, are the bright stars of the Teapot, which appear to be pouring tea onto the equally bright tail of the Scorpion.