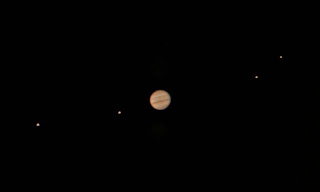 Prominent in the night sky this month is the planet Jupiter, the brightest “star” in the sky visible through the end of the year and into the next.
Easily visible even through modest binoculars are the four Galilean moons, discovered by Galileo Galilei in January 1610. They are the largest of the many moons of Jupiter and derive their names from the lovers of Zeus: Io, Europa, Ganymede and Callisto. They are among the most massive objects in the Solar System outside the Sun and the eight planets, with radii larger than any of the dwarf planets.
Io is the innermost of the four Galilean moons and is the most geologically active object in the Solar System, with over 400 active volcanoes. This extreme geologic activity is the result of tidal heating from friction generated within Io's interior as it is pulled between Jupiter and the other Galilean satellites.
Ganymede is the largest moon in the Solar System, 8% larger than that of the planet Mercury, 2% larger than that of Titan, and nearly 50% larger than our own Moon. Its surface is composed of two main types of terrain. Dark regions, saturated with impact craters and dated to four billion years ago, cover about a third of the satellite. Lighter regions, crosscut by extensive grooves and ridges and only slightly less ancient, cover the remainder. The cause of the light terrain's disrupted geology is not fully known, but was likely the result of tectonic activity brought about by tidal heating.
Callisto is the fourth Galilean moon of Jupiter by distance, with an orbital radius of about 1,880,000 km. It does not form part of the orbital resonance that affects three inner Galilean satellites—Io, Europa and Ganymede—and thus does not experience appreciable tidal heating.
Europa is the smallest of its four Galilean satellites, but still one of the largest bodies in the Solar system, slightly smaller than the Moon. 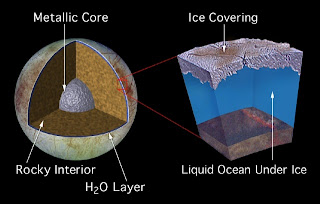 A model of Europa's interior, including a global ocean. If a 100 kilometer-deep ocean existed below the Europan ice shell, it would be 10 times deeper than any ocean on Earth and would contain twice as much water as Earth's oceans and rivers
New research suggests that there may be plenty of oxygen available in that ocean to support life, a hundred times more oxygen than previously estimated.
The chances for life there have been uncertain, because Europa’s ocean lies beneath several miles of ice, which separates it from the production of oxygen at the surface by energetic charged particles (similar to cosmic rays). Without oxygen, life could conceivably exist at hot springs in the ocean floor using exotic metabolic chemistries, based on sulfur or the production of methane. However, it is not certain whether the ocean floor actually would provide the conditions for such life.
Therefore a key question has been whether enough oxygen reaches the ocean to support the oxygen-based metabolic process that is most familiar to us. An answer comes from considering the young age of Europa’s surface. Its geology and the paucity of impact craters suggests that the top of the ice is continually reformed such that the current surface is only about 50 million years old, roughly 1% of the age of the solar system.
Richard Greenberg of the University of Arizona has considered three generic resurfacing processes: gradually laying fresh material on the surface; opening cracks which fill with fresh ice from below; and disrupting patches of surface in place and replacing them with fresh material. Using estimates for the production of oxidizers at the surface, he finds that the delivery rate into the ocean is so fast that the oxygen concentration could exceed that of the Earth’s oceans in only a few million years.
Greenberg says that the concentrations of oxygen would be great enough to support not only microorganisms, but also “macrofauna”, that is, more complex animal-like organisms which have greater oxygen demands. The continual supply of oxygen could support roughly 3 billion kilograms of macrofauna, assuming similar oxygen demands to terrestrial fish.
The good news for the question of the origin of life is that there would be a delay of a couple of billion years before the first surface oxygen reached the ocean. Without that delay, the first pre-biotic chemistry and the first primitive organic structures would be disrupted by oxidation. Oxidation is a hazard unless organisms have evolved protection from its damaging effects. A similar delay in the production of oxygen on Earth was probably essential for allowing life to get started here.