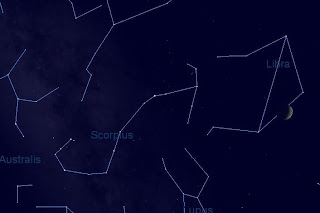 The illustration above shows the three day old Moon in the faint constellation of Libra.
The stars forming the triangle which the moon appears to be exiting are, from the “top”, Zubeneschamali, Zubenelgenubi, a visual binary, and Brachium, an eclipsing variable.
A much fainter star in the constellation of the Scales is Gliese 581, a red dwarf star with spectral type M3V, located 20.3 light years away from Earth. Its estimated mass is about a third of that of the Sun, and it is the 89th closest known star system to the Sun. Observations suggest that the star has at least four, and possibly six, planets: Gliese 581 e, b, c, g (unconfirmed), d and f (unconfirmed).
Gliese 581 has been the subject of a "huge amount of attention" in the quest to discover the first habitable planet; in 2010, attention focused on unconfirmed planet g, which would have been close to the middle of the star's habitable zone, but more recently, in a study published in The Astrophysical Journal Letters, planet d "can be considered the first confirmed exoplanet that could support Earth-like life."
The star system first gained attention after Gliese 581 c, the first low-mass extrasolar planet found to be near its star's habitable zone, was discovered in April 2007. It has since been shown that under known terrestrial planet climate models, Gliese 581 c is likely to have a runaway greenhouse effect, and hence is probably too hot to be habitable, analogous to Venus. A subsequently discovered planet Gliese 581 d, may be just inside or just outside the outer boundary of the habitable zone (depending in part on the greenhouse properties of its atmosphere), analogous to Mars The discovery of exoplanet Gliese 581 e the least-massive planet known around a normal star, was announced in April 2009.
Excitement spiked again in September 2010 with the claimed discovery of Gliese 581 g, orbiting between c and d, believed to be the planet with the greatest likelihood of having conditions suitable for liquid water at its surface found to date because it is within the middle of the habitable zone. However, its existence was later put in "serious doubts" following further analysis. 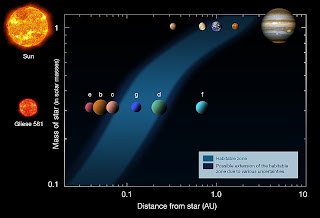 The much more distinctive, and much larger, constellation of Scorpius follows Libra in the sky. Scorpius occupies an area of 497 square degrees and contains ten stars with known planets.
The brightest star in the constellation is alpha Scorpii, or Antares ("like Mars"), named for its reddish-orange colour, which resembles that of the planet Mars. Antares is a red supergiant with a radius about 800 times that of the Sun. It is classified as a variable star; its apparent magnitude varies between 0.9 and 1.8. It has a hot blue companion star about 2.9 arcseconds away. Antares is the 16th brightest star in the sky. It is approximately 600 light-years distant from Earth. It is also of the brightest stars near the ecliptic, the Sun’s apparent path in the sky.
The only planets in the night sky are Saturn, which is setting at viewing time, and Jupiter which does not rise until past 10 o’clock.