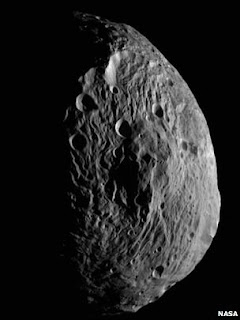 The Dawn probe has successfully entered orbit around the asteroid Vesta. Pictured above is the asteroid’s southern polar region, seen from a distance of about 10,500km
Asteroids are a class of small Solar System bodies in orbit around the Sun. They have also been called planetoids, especially the larger ones. They are grouped with the outer bodies as minor planets, which is the term preferred in astronomical circles
A meteoroid is a suggested term for a sand- to boulder-sized particle of debris in the Solar System. The visible path of a meteoroid that enters Earth's (or another body's) atmosphere is called a meteor, or colloquially a shooting star or falling star. If a meteoroid reaches the ground and survives impact, then it is called a meteorite. Many meteors appearing seconds or minutes apart are called a meteor shower.
A comet is an icy, small Solar System body which, when close enough to the Sun, displays a visible coma (a thin, fuzzy, temporary atmosphere) and sometimes also a tail. These phenomena are both due to the effects of solar radiation and the solar wind upon the nucleus of the comet. Comet nuclei range from a few hundred meters to tens of kilometers across and are composed of loose collections of ice, dust, and small rocky particles. Comets have been observed since ancient times and have traditionally been considered bad omens.
The probe has taken four years to get to Vesta and will spend the next year studying the huge rock before moving on to the "dwarf planet" Ceres.
Asteroid Vesta looks like a punctured football, the result of a colossal collision sometime in its past that knocked off its south polar region.
Vesta was discovered in 1807, the fourth asteroid to be identified in the great belt of rocky debris orbiting between Mars and Jupiter.
At the time, its great scale meant it was designated as another planet but it later lost this status as researchers learnt more about the diversity of objects in the Solar System.
Asteroids can tell us about the earliest days of the Solar System. These wandering rocks are often described as the rubble that was left over after the planets proper had formed.
Vesta and Ceres should make for interesting subjects. They are both evolved bodies - objects that have heated up and started to separate into distinct layers.
Vesta is thought to have a metal core in the centre - an iron core - and then silicate rock around it. Sometime in its history, it got banged on the bottom and a lot of material was liberated. Some of this material was pulled into the Earth's atmosphere. One in 20 meteorites seen to fall to Earth has been identified with Vesta.
Ceres, which, at 950km in diameter, is by far the largest and most massive body in the asteroid belt, probably did not evolve as much as Vesta.
Scientists think it likely that it retains a lot of water, perhaps in a band of ice deep below the surface.
Dawn's quest at Vesta over the coming months will be to map the asteroid's surface.
We will not be able to observe these small, dark objects, but Saturn is still visible, as are some distinctive asterisms. Scorpius is in the south, Ursa Major in the north, and the Summer Triangle is rising in the east.