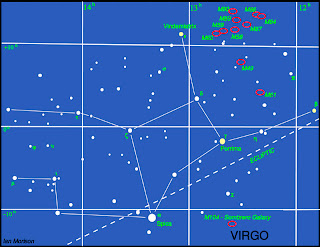 The constellation illustrated above, Virgo, is high in the south at the meeting time.
Though a large constellation, Virgo, the Virgin, does not have much of any prominent stellar pattern, relying on Spica to tell us where it is. Also shining brightly in the faint asterism is the planet Saturn, which is very close to Porrima at the moment.
With 26 known exoplanets orbiting around 20 stars in this constellation, Virgo has more confirmed exoplanets than any other constellation. 8 planets in this constellation were discovered in 2009, which is the most planets discovered in a single constellation in a single year.
The star 70 Virginis has one of the first known extrasolar planetary systems with one confirmed planet 7.5 times the mass of Jupiter. Chi Virginis has one of the most massive planets ever detected, at a mass of 11.1 times that of Jupiter. The sun-like star 61 Virginis has three planets: one is a super-Earth and two are Neptune-mass planets.
Because of the presence of a galaxy cluster (consequently called the Virgo cluster) within its borders 5° to 10° west of Vindemiatrix (which can be seen at the “top” on the cart above) this constellation is especially rich in galaxies.
A noted galaxy that is not part of the cluster is the Sombrero Galaxy (M104), an unusual spiral galaxy. It is located about 10° due west of Spica
Though at a distance of 250 light years Spica is still first magnitude (1.04), showing its absolute brilliance, the star visually 1900 times more luminous than the Sun. The apparent brightness is deceptive, however, as Spica actually consists of two stars very close together (a mere 0.12 Astronomical Units apart) that orbit each other in slightly elliptical paths with a period of only 4.0145 four days, which makes them difficult to study individually. Both are blue class B (B1 and B4) hydrogen-fusing dwarfs (the brighter nearing the end of its stable lifetime), making Spica one of the hottest of the first magnitude stars. The high temperature produces a great deal of radiation in the ultraviolet, which renders Spica vastly brighter than visually indicated.
The brighter primary star has a temperature 22,400 Kelvin, a true luminosity of 12,100 Suns, a radius 7 solar, and a mass 10.5 times solar, which may be enough to send it someday into a supernova explosion.
Just up and to the right of Spica lies dimmer, third magnitude Porrima, Virgo's Gamma star (or Gamma Virginis). Unlike most star names, which are Arabic, this one is Latin and honors a Roman goddess of prophecy. A telescope shows a remarkable sight, one of the finest double stars in the sky. The components are almost perfect identical twins, both white class F (F0) dwarf stars with surface temperatures of about 7100 degrees Kelvin, significantly warmer than the Sun. They orbit each other on highly elliptical paths in only 169 years. Thirty-eight light years away, the stars average 43 Astronomical Units from each other, about the distance between the Sun and Pluto, the orbital eccentricity taking them between 81 and 5 AU.
The best Saturn viewing window is nearing its end, just as the ring tilt begins to widen. Saturn moves away from Porrima, and on July 3, it will look more three dimensional as the shadows of the rings and the globe are visible.