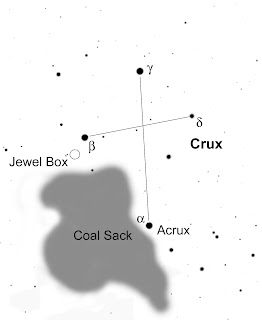 The meeting this month celebrates the 20th year of the society's existance.
The constellation illustrated above is a constant source of interest to anyone who looks up and is living here, so here is a compendium of what I have found out about it trawling the web.
Crux is visible from latitudes south of 25 degrees North and completely invisible in latitudes above 35 degrees North. Crux, being Latin for cross, is commonly known as the Southern Cross (in contrast to the Northern Cross), and is the smallest of the 88 modern constellations, but nevertheless one of the most distinctive. It is surrounded on three sides by the constellation Centaurus.
The invention of Crux is generally attributed to Royer in 1679, but we know it was written about some two centuries earlier than that. It was defined as a separate asterism in the 16th century after Amerigo Vespucci's expedition to South America in 1501. Vespucci mapped the two stars, Alpha Centauri and Beta Centauri as well as the stars of the Crux.
With the lack of a significant pole star in the southern sky (Sigma Octantis is closest to the pole, but is so faint as to be useless for the purpose), two of the stars of Crux (Alpha and Gamma, Acrux and Gacrux respectively) are commonly used to mark south.
Following the line defined by the two stars for approximately 4.5 times the distance between them leads to a point close to the Southern Celestial Pole.
The Coalsack Dark Nebula (or simply the Coalsack) is the most prominent dark nebula in the skies, easily visible to the naked eye as a dark patch silhouetted against the southern Milky Way.
A dark nebula is a type of interstellar cloud that is so dense that it obscures the light from the background emission or reflection nebula (e.g., the Horsehead Nebula) or that it blocks out background stars (e.g., the Coalsack Nebula). The extinction of the light is caused by interstellar dust grains located in the coldest, densest parts of larger molecular clouds. Clusters and large complexes of dark nebulae are associated with Giant Molecular Clouds. Isolated small dark nebulae are called Bok globules. Like other interstellar dust/material, things it obscures are only visible using radio waves in radio astronomy or infrared in infrared astronomy.
The Jewel Box is an open cluster in the constellation of Crux. This famous group of young bright stars was named the Jewel Box from its description by Sir John Herschel as "a casket of variously coloured precious stones," which refers to its appearance in the telescope.
An open cluster is a group of up to a few thousand stars that were formed from the same giant molecular cloud and have roughly the same age. They are loosely bound to each other by mutual gravitational attraction and become disrupted by close encounters with other clusters and clouds of gas as they orbit the galactic center resulting in a migration to the main body of the galaxy, as well as a loss of cluster members through internal close encounters.[1] Open clusters generally survive for a few hundred million years. In contrast, the more massive globular clusters of stars exert a stronger gravitational attraction on their members, and can survive for many billions of years. Open clusters have been found only in spiral and irregular galaxies, in which active star formation is occurring.