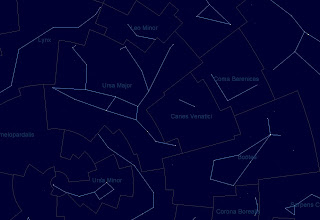 High in the north this month lies the small constellation of Canes Venatici.
The Polish astronomer Johannes Hevelius formed this constellation in 1687 from a scattering of faint stars beneath the tail of Ursa Major. Canes Venatici represents two dogs held on a lead by Boötes, snapping at the heels of the Great Bear. The southern dog contains the two brightest stars in the constellation, Alpha and Beta Canum Venaticorum. Ptolemy had listed both these stars in the Almagest as among the “unformed” stars outside the figure of the Great Bear, and hence not belonging to any particular constellation.
The idea of dogs being held by Boötes was not original to Hevelius. On a star chart published in 1533 the German astronomer Peter Apian showed Boötes with two dogs at his heels and holding their leash in his right hand. On another chart published by Apian three years later the number of dogs had grown to three and the leash had moved to the left hand, but the dogs were still following Boötes and not the bear. In neither case was any attempt made to connect the dogs with charted stars, nor were they named, so the credit for showing the dogs in their current position and for making them a separate constellation remains with Hevelius.
The Alpha star is known as Cor Caroli, meaning Charles’s Heart, in honour of King Charles I of England. It was given this title by Sir Charles Scarborough, physician to King Charles II. Scarborough said that the star shone particularly brightly on the night of 1660 May 29, when King Charles II returned to London at the Restoration of the Monarchy. Because of this there has been much confusion over which King Charles the star is supposed to commemorate, but it definitely refers to the first King Charles. It was originally shown in 1673 on a star map by the English cartographer Francis Lamb under the name Cor Caroli Regis Martyris, a reference to the fact that King Charles I was beheaded. Lamb and others, such as the Englishman Edward Sherburne in 1675, drew a heart around the star surmounted by a crown, turning it into a mini-constellation.
The Beta star is called Chara, from the Greek for ‘joy’, the name given by Hevelius to the southern dog. The northern dog, called Asterion (‘little star’), is marked only by a scattering of faint stars. Johann Bode drew the dogs with their names engraved on their collars in his Uranographia atlas.
Canes Venatici contains a globular cluster of stars, M3, and a beautiful spiral galaxy, M51, called the Whirlpool. M51 was the first galaxy in which spiral form was noticed, by the Irish astronomer Lord Rosse in 1845. It consists of a large galaxy in near-collision with a smaller one.