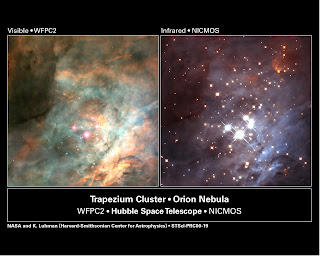 The Trapezium, or Orion Trapezium Cluster is a tight open cluster of stars in the heart of the Orion Nebula, in the constellation of Orion. It was discovered by Galileo Galilei. On February 4, 1617 he sketched three of the stars (A, C, D), but missed the surrounding nebulosity. The fourth component (B) was identified by several observers in 1673, and several more components were discovered later, for a total of eight by 1888. Subsequently several of the stars were determined to be binaries. Telescopes of amateur astronomers from about 5 inch aperture can resolve six stars under good seeing conditions. The Trapezium is a relatively young cluster that has formed directly out of the parent nebula. The five brightest stars are on the order of 15-30 solar masses in size. They are within a diameter of 1.5 light-years of each other and are responsible for much of the illumination of the surrounding nebula. The Trapezium may be a sub-component of the larger Orion Nebula Cluster, a grouping of about 2,000 stars within a diameter of 20 light-years. The Orion Nebula (also known as Messier 42, M42, or NGC 1976) is a diffuse nebula situated south of Orion's Belt. It is one of the brightest nebulae, and is visible to the naked eye in the night sky. M42 is located at a distance of 1,344 ± 20 light years and is the closest region of massive star formation to Earth. The M42 nebula is estimated to be 24 light years across. Older texts frequently referred to the Orion Nebula as the Great Nebula in Orion or the Great Orion Nebula. The Orion Nebula is one of the most scrutinized and photographed objects in the night sky, and is among the most intensely studied celestial features. The nebula has revealed much about the process of how stars and planetary systems are formed from collapsing clouds of gas and dust. Astronomers have directly observed protoplanetary disks, brown dwarfs, intense and turbulent motions of the gas, and the photo-ionizing effects of massive nearby stars in the nebula. There are also supersonic "bullets" of gas piercing the dense hydrogen clouds of the Orion Nebula. Each bullet is ten times the diameter of Pluto's orbit and tipped with iron atoms glowing bright blue. They were probably formed one thousand years ago from an unknown violent event. The Messier objects are a set of astronomical objects first listed by French astronomer Charles Messier in 1771. The original motivation of the catalogue was that Messier was a comet hunter, and was frustrated by objects which resembled but were not comets. He therefore compiled a list of these objects, in collaboration with his assistant Pierre Méchain.