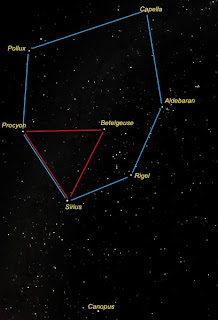 The illustration above neatly fits what can be seen looking toward the south on observation night. The Winter Hexagon or Winter Circle/Oval is an asterism appearing to be in the form of a hexagon with vertices at Rigel, Aldebaran, Capella, Pollux/Castor, Procyon, and Sirius. It is mostly upon the Northern Hemisphere's celestial sphere. On most locations on Earth (except the South Island of New Zealand and the south of Chile and Argentina and further south) this asterism is prominently in the sky from approximately December to March. In the tropics and southern hemisphere this (then called "summer hexagon") can be extended with the bright star Canopus in the south. Smaller and more regularly shaped is the Winter Triangle (also known as the Great Southern Triangle), an approximately equilateral triangle that shares two vertices (Sirius and Procyon) with the larger asterism. The third vertex is Betelgeuse. These three stars are three of the ten brightest objects, as viewed from Earth, outside the Solar System. Betelgeuse is also particularly easy to locate, being a shoulder of Orion, which assists stargazers in finding the triangle. Once the triangle is located, the larger hexagon may then be found. Several of the stars in the hexagon may also be found independently of one another by following various lines traced through various stars in Orion. The stars in the hexagon are parts of six constellations. Counter-clockwise around the hexagon, starting with Rigel, these are Orion, Taurus, Auriga, Gemini, Canis Minor, and Canis Major. Canopus , which our latitude fortunately enables us to see, is the brightest star in the southern constellation of Carina, and the second brightest star in the night-time sky, after Sirius. Since Canopus is so far south in the sky, it never rises in mid- or far-northern latitudes; in theory the northern limit of visibility is latitude 37°18' north. This is just south of Athens and San Francisco, and very close to Seville. It is almost exactly the latitude of Lick Observatory on Mt. Hamilton, California, from which it is readily visible due to the effects of elevation and atmospheric refraction, which add another degree to its apparent altitude. Before the launching of the Hipparcos satellite telescope, distance estimates for the star varied widely, from 96 light years to 1200 light years. Had the latter distance been correct, Canopus would have been one of the most luminous stars in our galaxy. Hipparcos established Canopus as lying 310 light years from our solar system. Canopus is 13,600 times more luminous than the Sun and the most intrinsically bright star within approximately 700 light years. In fact, from 1 astronomical unit, Canopus would have an apparent magnitude of -37. For most stars in the local stellar neighborhood, Canopus would appear to be one of the brightest stars in the sky. Canopus appears less bright than Sirius in our sky only because Sirius is much closer to the Earth (8.6 light years). To anyone living in the northern hemisphere, but far enough south to see the star, it served as a southern pole star. This lasted only until magnetic compasses became common. In modern times, Canopus serves another navigational use. Canopus' brightness and location well off the ecliptic makes it popular for space navigation. Many spacecraft carry a special camera known as a "Canopus Star Tracker" plus a sun sensor for altitude determination. To the right of the illustration (the west) Jupiter is setting low on the horizon. On March 12th through 16th, Mercury is close to Jupiter, just after sunset, and the smaller planet’s proximity to the giant makes it easy to find. Find a clear view to the west to observe this. Seven Mile beach would be ideal.