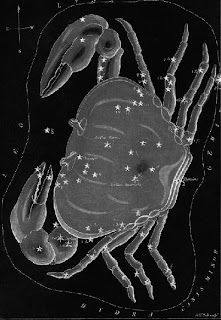 The zenith at 7 on Tuesday will be just across the boundary line separating Gemini from Cancer, the constellation illustrated above.
Cancer, the Crab, plays a minor role in the Twelve Labors of Hercules. While Hercules was busy fighting the multi-headed monster, Hydra, the goddess Hera, who did not like Hercules, sent the Crab to distract him. Cancer grabbed onto the hero's toe with its claws, but barely breaking the rhythm of his great battle with Hydra, Hercules crushed the crab with his foot. Hera, grateful for the little crustacean's heroic but pitiful effort, gave it a place in the sky.
Cancer is famous despite itself due to its Zodiacal origins. In fact, it is very faint with no stars brighter than 4th magnitude. However, it is home to Praesepe (M44), an open cluster also called the Beehive Cluster or the Gate of Men. In the picture above, it is the star marked next to the lower eyestalk. It is one of the nearest open clusters to the Solar System, and it contains a larger star population than most other nearby clusters. Under dark skies the Beehive Cluster looks like a nebulous object to the naked eye; thus it has been known since ancient times. 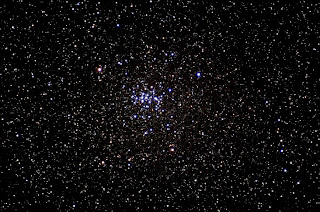 Like many star clusters of all kinds, Praesepe has experienced mass segregation. This means that bright, massive stars are concentrated in the cluster's core, while dimmer, less massive stars populate its halo (sometimes called the "corona"). The cluster's core radius is estimated at 3.5 parsecs (11.4 light years); its half-mass radius is about 3.9 parsecs (12.7 light years); and its tidal radius is about 12 parsecs (39 light years). However, the tidal radius also includes many stars that are merely "passing through" and not bona fide cluster members.
Altogether, the Praesepe cluster contains at least 1000 gravitationally bound stars, for a total mass of about 500-600 Solar masses. A recent survey counts 1010 high-probability members, of which 68% are M dwarfs, 30% are Sun-like stars of spectral classes F, G, and K, and about 2% are bright stars of spectral class A. Also present are five giant stars, four of which have spectral class K0 III and the fifth G0 III.
So far, eleven white dwarfs have been identified, representing the final evolutionary phase of the cluster's most massive stars, which originally belonged to spectral type B. Brown dwarfs, however, are extremely rare in this cluster, probably because they have been lost by tidal stripping from the halo.
Galileo was one of the first to study this open cluster with optical aid and counted forty stars.
Praesepe is Latin meaning crib or manger. Some ancient lore is associated with it: Greeks and Romans saw this "nebula" as the manger (Greek: Phatne) associated with two asses who eat from it, Asellus Borealis, the Northern Ass and Asellus Australis, the Southern Ass. Erathosthenes reported that these were the asses on which the gods Dionysos and Silenus rode into the battle against the Titans, who were frightened by the animals' braying so that the gods won. As a reward, the asses were put in sky together with Phatne.
The wine must have been good in ancient Greece.
Aratos (260 B.C.) mentioned this object as "Little Mist", Hipparchus (130 B.C.) included this object in his star catalog and called it "Little Cloud" or "Cloudy Star." Ptolemy, the Roman[1] mathematician, astronomer, geographer and astrologer mentions it as one of seven "nebulae" he noted in his Almagest.
According to the new determination by ESA's astrometric satellite Hipparcos, the cluster is 577 light years distant (previous estimates have been at 522 light years), and its age was estimated at about 730 million years.
Open clusters are physically related groups of stars held together by mutual gravitational attraction. Therefore, they populate a limited region of space, typically much smaller than their distance from us, so that they are all roughly at the same distance. They are believed to originate from large cosmic gas and dust clouds (diffuse nebulae) in the Milky Way, and to continue to orbit the galaxy through the disk. In many clouds visible as bright diffuse nebulae, star formation still takes place at this moment, so that we can observe the formation of new young star clusters. The process of formation takes only a considerably short time compared to the lifetime of the cluster, so that all member stars are of similar age. Also, as all the stars in a cluster formed from the same diffuse nebula, they are all of similar initial chemical composition.
Saturn is in the constellation Leo, shining in bright competition with Regulus.