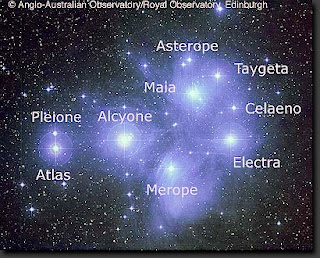 The Pleiades, known as the Seven Sisters, will be close to the crescent Moon on the 29th March . This is a nearby, fairly loose open cluster of about 500 stars in the constellation Taurus. Although it is also known as the Seven Sisters, most people can see only six stars, all of them bright blue-white B or Be stars: Alcyone, Atlas, Electra, Maia, Merope, and Taygeta (Pleione is the seventh brightest).
Dust that forms a faint reflection nebulosity around the brightest stars was thought at first to be left over from the formation of the cluster (hence the alternate name Maia Nebula after the star Maia), but is now known to be an unrelated dust cloud in the interstellar medium that the stars are currently passing through. Astronomers estimate that the cluster will survive for about another 250 million years, after which it will disperse due to gravitational interactions with its galactic neighborhood.
They have long been known to be a physically related group of stars rather than any chance alignment. The Reverend John Michell calculated in 1767 that the probability of a chance alignment of so many bright stars was only 1 in 500,000, and so correctly surmised that the Pleiades and many other clusters of stars must be physically related. When studies were first made of the stars' proper motions, it was found that they are all moving in the same direction across the sky, at the same rate, further demonstrating that they were related.
The distance to the Pleiades is an important first step in the so-called cosmic distance ladder, a sequence of distance scales for the whole universe. The size of this first step calibrates the whole ladder, and the scale of this first step has been estimated by many methods. As the cluster is so close to the Earth, its distance is relatively easy to measure. Accurate knowledge of the distance allows astronomers to plot a Hertzsprung-Russell diagram for the cluster which, when compared to those plotted for clusters whose distance is not known, allows their distances to be estimated. Other methods can then extend the distance scale from open clusters to galaxies and clusters of galaxies, and a cosmic distance ladder can be constructed. Ultimately astronomers' understanding of the age and future evolution of the universe is influenced by their knowledge of the distance to the Pleiades.
The nine brightest stars of the Pleiades are named for the Seven Sisters of Greek mythology: Sterope, Merope, Electra, Maia, Taygete, Celaeno, and Alcyone, along with their parents Atlas and Pleione.
The Pleiades are a prominent sight in winter in the Northern Hemisphere and in summer in the Southern Hemisphere, and have been known since antiquity to cultures all around the world, including the Māori and Australian Aborigines, the Persians (who called them Parveen/parvin), the Chinese, the Maya (who called them Tzab-ek), the Aztec (Tianquiztli), and the Sioux of North America. Some Greek astronomers considered them to be a distinct constellation, and they are mentioned by Hesiod, and in Homer's Iliad and Odyssey. They are also mentioned three times in the Bible (Job 9:9 and 38:31, as well as Amos 5:8). The Pleiades (Krittika) are particularly revered in Hindu mythology as the six mothers of the war god Skanda, who developed six faces, one for each of them. Some scholars of Islam suggested that the Pleiades (At-thuraiya) are the Star in Najm which is mentioned in the Quran.
Saturn is risen in the east (magnitude +0.5, near the hind foot of Leo) and is just past opposition. The planet is well up in the southeast by midevening, and highest in the south around midnight. Don't confuse Saturn with slightly fainter Regulus 18° (nearly two fist-widths at arm's length) to its upper right in early evening, and more directly to Saturn's right late at night.
Saturn's rings are 3½° from edge on. The rings will open to 4° by late May, then will close to exactly edge-on next September 4th — when, unfortunately, Saturn will be out of sight practically in conjunction with the Sun.