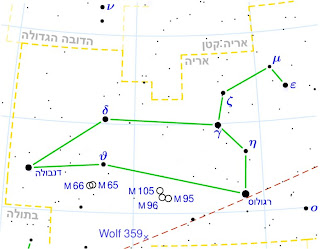 In the rainy season the decision whether or not to view is determined by the amount of cloud cover. If more than 50% of the sky is obscured, we cancel. This can sometimes be a difficult judgment call.
The constellation illustrated above is Leo, the Lion, which is visible overhead as darkness falls. The sickle shape, or backwards question mark with the bright star Regulus at its base, is easy to discern.
Brighter Saturn is below the question mark.
Regulus, which means the heart of the lion, is a hot, blue star which has a luminosity about 140 times that of the Sun and about 3.4 times the diameter. The star is in fact the A component of a multiple star system. The B and C components are a close binary pair revolving together about 100 AU (Astronomical Unit) from the A star. This is two and a half time the distance of Pluto and the Sun.
The Sumerians are recorded as seeing this group of stars as a lion. The form of the Lion was probably passed along to the Babylonians, Greeks, Roman and others. The Egyptians worshipped the lion because the sun was in this constellation at the time of the life-giving floods of the Nile.
In Greek mythology, it was identified as the Nemean Lion which was killed by Herakles during one of his twelve labours, and subsequently put into the sky by the goddess Hera, the vengeful wife of his father, Zeus.