CIAS December News Letter: A Star in the East for Christmas

Meetings
The next  public meeting of the Cayman Islands Astronomical Society will be at St Pedros  Castle on Sunday 28th of December starting at 6:30 PM – weather permitting. The meeting will be cancelled if there is more than 50 percent cloud cover .
If in doubt ring me on 925 7657 Please remember to dip head lights on arrival
If anyone would like to help me set up that night please come along early at around 6 PM

On that night we will be treated to TWO passes of the International Space Station.(ISS)
The time will vary a little on the night due to the age of the predictions made at the time of writing (19th Dec)  Worse- the ISS may have made a maneuver to correct its orbit too!


So add a few minutes leeway each way.

Im also at the Marriot on the Saturday evening 27th – if anyone would like to help out please ring 925 7657 I will be there from 7:00 PM till 8:30PM. Theres’ a really good crossing of the ISS that night too.

Christmas and Telescopes
It usual to mention that people buying telescopes  as Christmas presents this time of  the year should try and avoid those bargains as seen in “Cost-U-More” . If you need advice please contact me although I admit it’s a little late now if you have already bought something. This is a good article http://www.scopereviews.com/begin.html and I agree with two things – 1) don’t rush    and  2) even a cheap pair of binoculars is a good place to start. If you need some help in setting up let me or Bill know – phone numbers below

In January starting on the 6th of Jan and running for 8 weeks there will be a joint UCCI/CIAS course at the UCCI Observatory entitled “Astrophotography Essentials” The lion’s share of the course will be taught by Bill Hrudey and will be very modestly priced. Last we talked it was about 125 CI. Let me or Bill (whrudey@candw.ky) know if you are interested in coming and for further details.  You will need a camera (obviously) and ideally an SLR.  A T-adapter will also be needed – (we have some for Canon models only).You won’t necessarily need a telescope but you will have the opportunity to use different types on the course.

For the third year running we will be hopefully at the Cayman National Cultural Foundations “Red Sky At Night Festival” on February 28th 2015 down Astronomical Avenue.

The CIAS will be involved in some capacity at the upcoming UCCIs “STEM CARIB 2015” conference too – Ill certainly list all the speakers attending next year – the conference always has a high level of Astronomy related topics. Dates are March 17-20. One key note speaker is Dr Hakeem Oluseyi

The Winter Solstice is on December 22nd and is the shortest day of the year in the Northern Hemisphere. The evenings even here drawn in early although surprisingly to some the latest sunset occurs in late November!

Its sometimes really nice to spot something quite normal in the sky for this time of the year but the moment when its seen itself makes it very special. The run down (?!) into Christmas for some of us seems very frantic with far too many things to do against a running clock... and for the third visit to a supermarket in as many hours tonight (Friday 19th) it was wonderful to see Orion rising in the East as I  drove to Savannah. Do try and grab a few moments with the old fella!

Planet wise- below is a sky map for the ISS crossing at 18:27 on the 28th of December
Venus and potentially Mercury will be visible in the West after sunset – Venus will become much more visible in the evening sky in the next few weeks

Jupiter is around too – but not really rising until around 10 :30 PM as a really  brilliant star in the East. Jupiter was known as Jove in Roman times and was a key deity – in fact king of all the gods.

I do like the idea of a star in the East this time of the year. The Internet is of course full of people trying to connect the name of Jove to Jehova too. Im not into that but what I will say is that Jupiter is quite a sight in the late evening and just maybe one of the many options we have for the  phenomenon once seen as The Star of Bethlehem. For example it would be a great star for navigation purposes

Whatever your religion have a great break and hopefully see some of your before the New Year.

Chart below is for Sunday  28th December 2014  Time (local) 18:27 ISS crossing – remember the times may be out by a few minutes. The Chart is taken form the website http://www.heavens-above.com/ with the site authors permission. 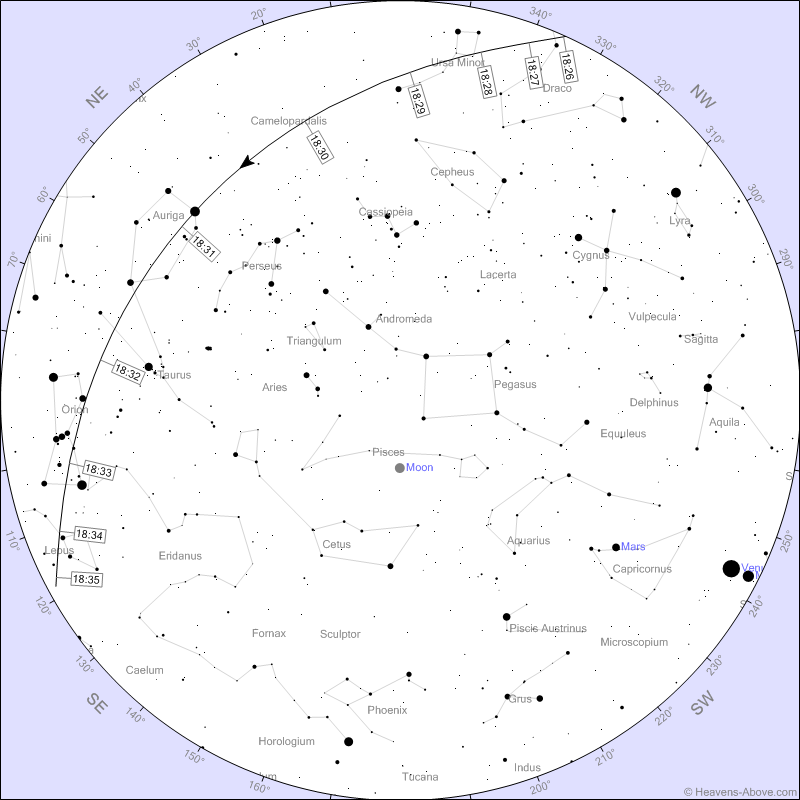