The last week  in November is going to be very busy dealing with a well above average number of requested for evening viewings  from Schools and Youth Clubs. Last count was  6 evenings!

With that in mind we have postponed the regular session at St Pedro's. Additionally there are a number of events going on at the Castle which has reduced our options too.

We will try and do something special in December with the new Telescope.

It arrived and was assembled single handed but it took a while, then collimated and then disassembled in my living room. It’s big !! I know that if we had gone for the 14inch that would have been too much. The telescope is an Orion  12 inch Dobsonian with a GOTO computer allowing objects to be selected and then tracked automatically

The Next Society (members only) meeting will be held in my Strata’s Swimming pool area where I can at least suppress some of the lights and start up the new Telescope scope with  some comfort on home territory. Then we will see what we have bought!

As a thank you for all the hard work and support in fund raising for the new scope I will supply pizza - members can bring a bottle if they want. No smashing on the tube though!

I’ll be there from 5:30 PM onwards – and will start putting the Scope together around 6:00PM. If you want to give a hand or see how it all goes together come early! RSPV

There are two low number Meteor showers this month – there’s the North Taurids – which peaed on November the evening of the 11th to the 12th  described as a “rambling sparse” shower with a maximum of 5 per hour – but they can produce (rarely) spectacular fireballs. Infact I did see one last night -(13th) at 10 PM

The second display this month is the Leonids on the evening of November the 17th - 18th best seen after midnight and once the radiant in Leo has risen. (Max 10-15 per hour)  Again low numbers but who knows.

In December we have the Geminids on the evening of the 13th to the 14th  .Remember the numbers quoted are for a theoretical maximum if the radiant is directly overhead. I have seen good numbers from this shower in previous years - certainly double figures at maximum with a maximum number quoted at 50 . Other members on Island have also reported good numbers here too

Planets visible in the evening are somewhat limited to Mars (see the diagram opposite) and with the new telescope perhaps we will see the somewhat neglected Ice Planets of Uranus and Neptune.

Mars is seen in the South West just after nightfall. The picture here shows its location near the Moon on the 25th and the 26th. 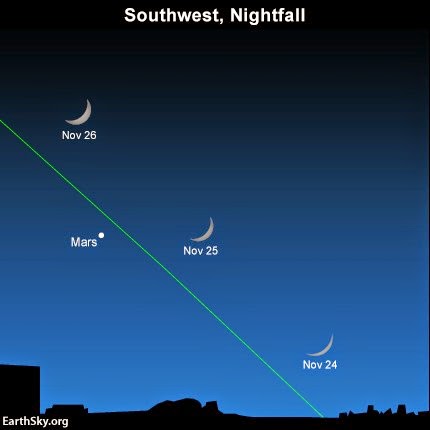 Mars telescopically is a tiny image and its getting smaller. It is almost with apology I keep saying – Mars is visible but telescopically its not very impressive. Here is the reason why.

Earlier this year in April we had a closer look at Mars In Astronomy this special close approach happens at an alignment called  “Opposition”. This occurs every 780 days and is a combination of the Earth going around the Sun in 365 days and Mars going round the Sun 687 days. The net effect is that these special closes approaches really only occur every two years (approx)

So in 2018 we should get a good viewing! So at the moment Mars can be seen in the evening sky but is a small object telescopically and will get smaller too. However apart from being a pretty star in the sky we can also use it as a marker to find other things. For example on December the 4th Mars is very close to a Globular Cluster M75 (NGC 6864) a rather faint distant group of stars but on the 4th relatively easy to find.

The diagram to the right  shows Mars at Opposition, In fact all of the outer planets play the same game. As we move further out in the solar system the actual movement of the other planets relative to the background constellations gets slower and slower- . Opposition for Jupiter for example occurs every 399 days as Jupiter orbits the sun every 11.86 years!

Jupiter is our next best visible planet – rising above the horizon just before midnight, By the end of November this will be nearer 10 PM . However the best time is in the early hours before dawn .Between Nov 10-15 in the pre dawn skies look for Jupiter near the Moon and the star Regulus in Leo the Lion.

The star chart below is taken from Chris Pete’s excellent site “Heavens Above” for 29th November at around 8 PM . The Summer Triangle will still be easily visible – If you are on Severn Mile Beach it appears as a nice back drop on the Western Sky – with Mars low on the horizon after Sunset. Look for Cassiopeia (The Inverted W – the Big Mac of the Skies)  . The square of Pegasus overhead and towards the East (not so good from Seven Mile beach) is Orion – telling us Winter is fast approaching. 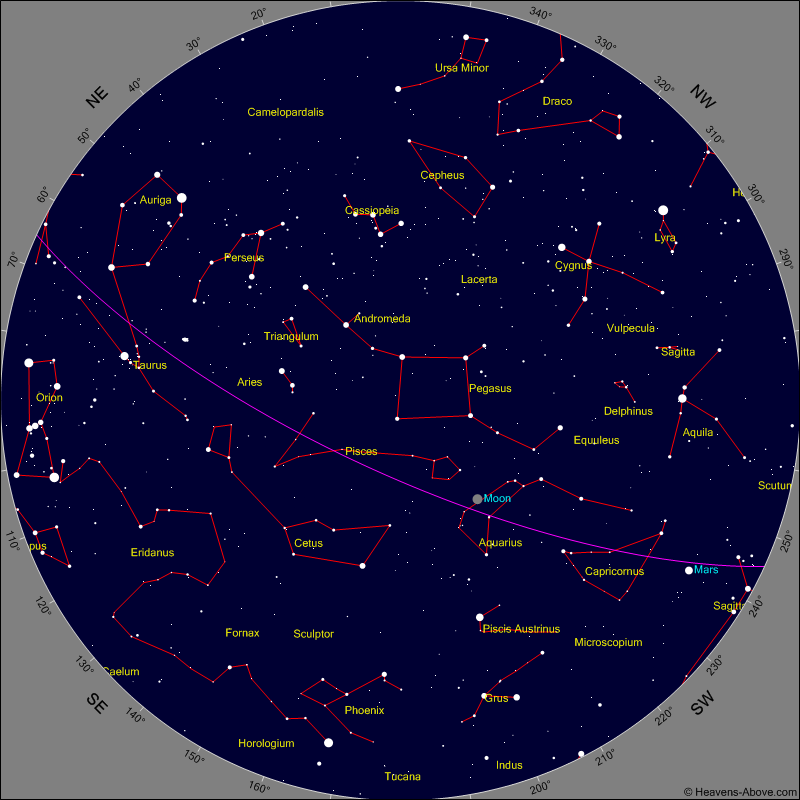 Finally we are on Twitter – So every entry made from @kyastro appears on the Astronomy Society Facebook page. Ill be adding some hashtag sites but I suggest #caymanastro is a good place to start!

So if you are already twittering please follow us!