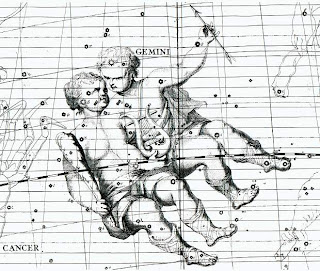 Almost overhead as darkness falls, bright Mars shines close to the heads of the twins illustrated above, the constellation Gemini.
The two brightest stars in the constellation, marking the heads of the twins, are named Castor and Pollux. Astronomers have found that Castor is actually a complex system of six stars linked by gravity, although to the eye they appear as one. Pollux is an orange giant star. Unlike the twins that they represent, the stars Castor and Pollux are not related since they lie at different distances from us. Eta Geminorum is called Propus, meaning ‘forward foot’ in Greek, a name that first appears with Eratosthenes.
Gemini represents the twins Castor and Polydeuces (Pollux is the Latin form of his name); they were known to the Greeks as the Dioscuri, literally meaning ‘sons of Zeus’. However, mythologists disputed whether both really were sons of Zeus, because of the unusual circumstances of their birth. Their mother was Leda, Queen of Sparta, whom Zeus visited one day in the form of a swan (now represented by the constellation Cygnus). That same night she also slept with her husband, King Tyndareus. Both unions were fruitful, for Leda subsequently gave birth to four children. In the most commonly accepted version, Polydeuces and Helen (later to become famous as Helen of Troy) were children of Zeus, and hence immortal, while Castor and Clytemnestra were fathered by Tyndareus, and hence were mortal.
Castor and Polydeuces grew up the closest of friends, never quarrelling or acting without consulting each other. They were said to look alike and even to dress alike, as identical twins often do. Castor was a famed horseman and warrior who taught Heracles to fence, while Polydeuces was a champion boxer. 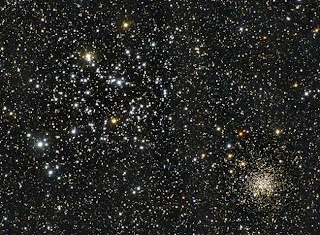 Near the three ‘foot’ stars lies M35, an open cluster. It was discovered by Philippe Loys de Chéseaux in 1745 and independently discovered by John Bevis before 1750. The cluster is scattered over an area of the sky almost the size of the full moon and is located 850 parsecs (2,800 light-years) from Earth.
It consists of several hundred stars scattered over an area the size of that covered by the full Moon. Even the naked eye finds this cluster easily under fairly good observing conditions. The slightest optical instrument will resolve the brighter stars and make it a splendid view at low magnifications, a nearly circular cluster with rather uniform stellar distribution. In telescopes, low powers and wide-field eye pieces show M35 at its best.
Of the other planets, Venus is visible in the west in the dusk, and Saturn is rising in the east.