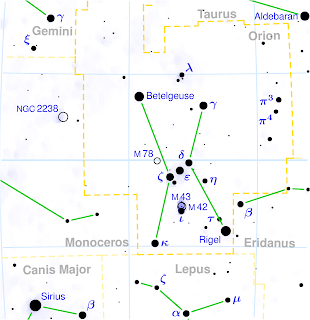 The prominent Winter constellations are now high overhead in the early evening, one of best known of which is Orion, the Hunter.
Orion includes the prominent asterism known as the Belt of Orion: three bright stars in a row. Surrounding the belt at roughly similar distances are four bright stars, which are considered to represent the outline of the hunter's body. Apparently descending from the 'belt' is a smaller line of three stars (the middle of which is in fact not a star but the Orion Nebula), known as the hunter's 'sword'.
The Orion Nebula (also known as Messier 42, M42, or NGC 1976) is a diffuse nebula situated south of Orion's Belt. It is one of the brightest nebulae, and is visible to the naked eye in the night sky. M42 is located at a distance of 1,344 ± 20 light years and is the closest region of massive star formation to Earth. The M42 nebula is estimated to be 24 light years across. Older texts frequently referred to the Orion Nebula as the Great Nebula in Orion or the Great Orion Nebula.
The Nebula is in fact part of a much larger nebula that is known as the Orion Molecular Cloud Complex. The Orion Molecular Cloud Complex extends throughout the constellation of Orion and includes Barnard's Loop, the Horsehead Nebula, M43, M78 and the Flame Nebula. Stars are forming throughout the Orion Nebula, and due to this heat-intensive process the region is particularly prominent in the infrared.
The nebula is visible with the naked eye even from areas affected by some light pollution. It is seen as the middle "star" in the sword of Orion, which are the three stars located south of Orion's Belt. The star appears fuzzy to sharp-eyed observers, and the nebulosity is obvious through binoculars or a small telescope.
The Orion Nebula contains a very young open cluster, known as the Trapezium due to the asterism of its primary four stars. Two of these can be resolved into their component binary systems on nights with good seeing, giving a total of six stars. The stars of the Trapezium, along with many other stars, are still in their early years. 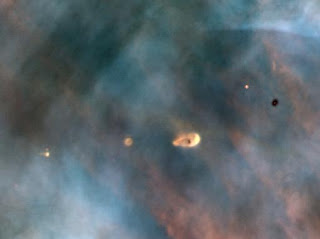 The Orion Nebula is an example of a stellar nursery where new stars are being born. Observations of the nebula have revealed approximately 700 stars in various stages of formation within the nebula.
Recent observations with the Hubble Space Telescope have yielded the major discovery of protoplanetary disks within the Orion Nebula, which have been dubbed proplyds, illustrated above. HST has revealed more than 150 of these within the nebula, and they are considered to be systems in the earliest stages of solar system formation. The sheer numbers of them have been used as evidence that the formation of star systems is fairly common in our universe.
Stars form when clumps of hydrogen and other gases in an H II region contract under their own gravity. As the gas collapses, the central clump grows stronger and the gas heats to extreme temperatures by converting gravitational potential energy to thermal energy. If the temperature gets high enough, nuclear fusion will ignite and form a protostar. The protostar is 'born' when it begins to emit enough radiative energy to balance out its gravity and halt gravitational collapse.
Typically, a cloud of material remains a substantial distance from the star before the fusion reaction ignites. This remnant cloud is the protostar's protoplanetary disk, where planets may form. Recent infrared observations show that dust grains in these protoplanetary disks are growing, beginning on the path towards forming planetesimals.
Once the protostar enters into its main sequence phase, it is classified as a star. Even though most planetary disks can form planets, observations show that intense stellar radiation should have destroyed any proplyds that formed near the Trapezium group, if the group is as old as the low mass stars in the cluster. Since proplyds are found very close to the Trapezium group, it can be argued that those stars are much younger than the rest of the cluster members.
Interstellar clouds like the Orion Nebula are found throughout galaxies such as the Milky Way. They begin as gravitationally bound blobs of cold, neutral hydrogen, intermixed with traces of other elements. The cloud can contain hundreds of thousands of solar masses and extend for hundreds of light years. The tiny force of gravity that could compel the cloud to collapse is counter-balanced by the very faint pressure of the gas in the cloud.
Whether due to collisions with a spiral arm, or through the shock wave emitted from supernovae, the atoms are precipitated into heavier molecules and the result is a molecular cloud. This presages the formation of stars within the cloud, usually thought to be within a period of 10-30 million years, as regions pass the Jeans mass and the destabilized volumes collapse into disks. The disk concentrates at the core to form a star, which may be surrounded by a protoplanetary disk. This is the current stage of evolution of the nebula, with additional stars still forming from the collapsing molecular cloud. The youngest and brightest stars we now see in the Orion Nebula are thought to be less than 300,000 years old, and the brightest may be only 10,000 years in age.
Some of these collapsing stars can be particularly massive, and can emit large quantities of ionizing ultraviolet radiation. An example of this is seen with the Trapezium cluster. Over time the ultraviolet light from the massive stars at the center of the nebula will push away the surrounding gas and dust in a process called photo evaporation. This process is responsible for creating the interior cavity of the nebula, allowing the stars at the core to be viewed from Earth. The largest of these stars have short life spans and will evolve to become supernovae.
Within about 100,000 years, most of the gas and dust will be ejected. The remains will form a young open cluster, a cluster of bright, young stars surrounded by wispy filaments from the former cloud. The Pleiades is a famous example of such a cluster.