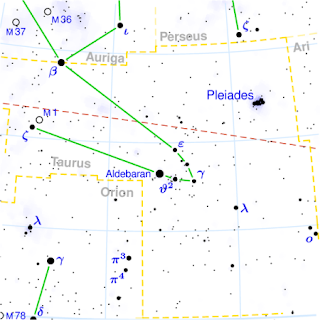 The prominent constellations of winter are now rising in the early part of the evening, Taurus, the Bull, illustrated above, being among the first.
Taurus is marked by a V-shaped pattern of stars that outlines the bull's face. Bright red Aldebaran, the "eye" of the bull, stands at one point of the V. This pattern is part of a cluster of stars called the Hyades — the second-closest star cluster to Earth. It consists of several hundred stars that lie about 130 light-years away.
Aldebaran outshines all the other stars that outline the bull's face. But Aldebaran isn't a member of the Hyades cluster — it just lies in the same direction. It's about 70 light-years away, half as far as the stars of the Hyades. Aldebaran is a red-giant — an old, bloated star that's used up most of its nuclear fuel. It's much larger and much brighter than our own middle-aged Sun.
On the other side of the sky, Venus is shining bright in the west.