I don’t know about you, but I have seen very little in the media about India’s successful mission to the Moon. 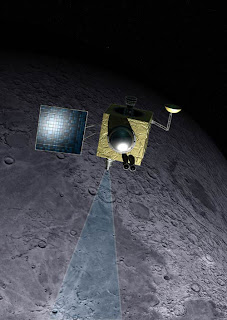 “In a historic event, the Indian space programme achieved a unique feat today (November 14, 2008) with the placing of Indian tricolour on the Moon's surface on Pandit Jawaharlal Nehru's birthday. The Indian flag was painted on the sides of Moon Impact Probe (MIP), one of the 11 payloads of Chandrayaan-1 spacecraft, that successfully hit the lunar surface today at 20:31 hrs (8:31 pm) IST. This is the first Indian built object to reach the surface of the moon. The point of MIP's impact was near the Moon's South Polar Region. It may be recalled that the modern Indian space programme was initiated in 1962 when Pandit Jawaharlal Nehru was the Prime Minister of India.”
As of writing this, everything is going as planned; the instruments have been activated and are operating correctly. And Mumbai is suffering.

Venus and Jupiter have been getting closer to each other and on viewing night will be joined by the crescent moon. Look to the west after dusk and watch the planets approach each other.
Dec. 1st is the best night of all. The now-15% crescent Moon moves in closer to form an isosceles triangle with Venus and Jupiter as opposing vertices. The three brightest objects in the night sky will be gathered so tightly together, you can hide them all behind your thumb held at arm's length.

It was a great meeting we had last week! Nice and dark in that other spot down the road!