The Cayman Islands Astronomical Society April newsletter 2015
The next general public meeting will be on Wednesday 22nd April at Pedro’s Castle, viewing will start at 7:00 PM usual rules apply - dip headlights on arrival and no parking on the grass
If more than 50 percent cloudy the meeting will be cancelled - If in doubt please phone me (not text) at 925 7657 at around 6 PM

This month’s date was chosen by the usual few days period after the new moon but also because its Earth Day -not Earth Hour which was last month .
Earth Hour which this year fell on March 28th was organized by the World Wide Fund For Nature (WWF) and involves turning off all non-essential lights for one hour between 8:30 and 9:30 PM local time to raise awareness Global environmental issues. Over 7000 cities and towns word wide are involved. We did try here and the CIAS went to support the National trust at Camana Bay. The weather was not kind and Bill and I had a somewhat rapid exit with the new 12 inch scope as the rain started.
Earth Day is was suggested by a peace activist John McConnell in 1969 at a UNESCO conference and later sanctioned at the United Nations is now celebrated in more than 192 countries worldwide. After much discussion and several committees later the date April 22nd was finally agreed on. The aim of Earth Day demonstrates support for environmental protection. It now also coincides with International Dark Sky Week http://www.darksky.org/component/content/article?id=109 which to us as Astronomers in Cayman is in my opinion a big environment issue.   The list goes on as International Dark Sky Week is part of Global Astronomy Month – which is part of the celebrations for Earth Month (April) So now we know! I cant help feeling Ive missed someone out here as well
So what can be seen at Pedros on Wednesday 22nd April?
The Lyrid meteor shower will be at its maximum but the best observing hours are around 2 AM with typically 10 to 20 meteors – so we may see one or two in the evening. The radiant will be in the low North East late in the evening.
The Sky Chart below comes from the excellent site Heavens-Above.com and is for 7:30 PM on the 22nd
Venus is seen in the West and Jupiter is overhead.  As the evening progresses we will hopefully get a glimpse of the Southern Cross.
This time of the year is good for galaxies too and I’m hoping with the 12 inch telescope we should finally see a few. The Constellations of Leo and Virgo are rich in galaxies. They are faint objects although can be quite large in angular size. 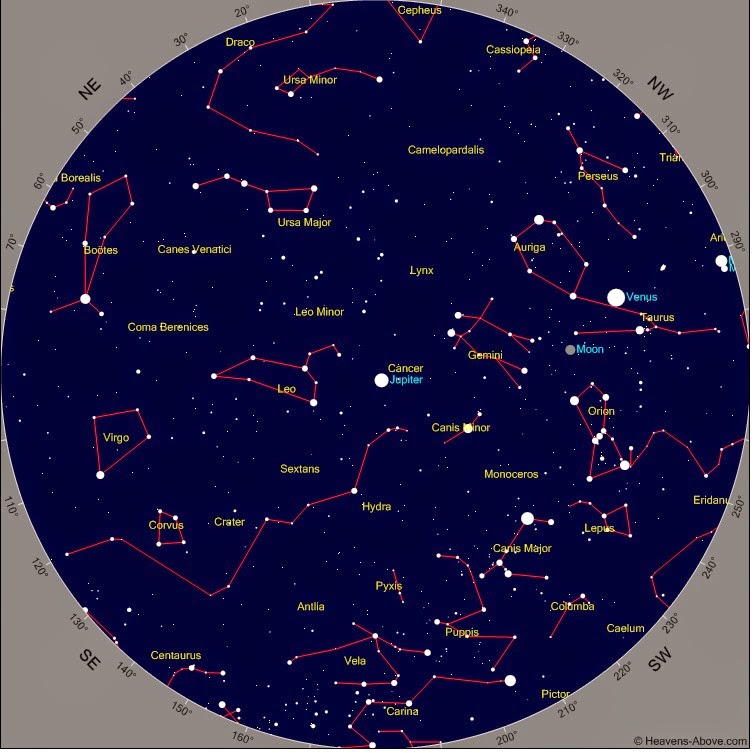 Finally the Sun has been quite active – some of the flares captured recently by Bill Hrudey at the UCCI Observatory have been posted on this web site below- a kind of daily weather report for the Sun. Heres a link to one of the great pictures taken http://spaceweathergallery.com/indiv_upload.php?upload_id=111663&PHPSESSID=imt2nmoqcuahduiqsi2jl5v7e3
Remember photos like this can only be taken with the correct equipment and astronomical filters People should not attempt to look directly at the sun through a telescope or a camera.  The Society has of course this equipment too and Im thinking of holding another daytime Solar viewing event soon
Clear Skies!
Chris Cooke 925 7657 cpcooke@aol.com  Visit Us of Facebook or http://caymanastronews.blogspot.com