The next meeting will be at Pedro’s Castle starting at 6:30 PM on-wards
on Monday January 6 th 2014 – although I’m back – its only just - so Richard will be in charge. Meetings are cancelled if there is more than 50 percent cloud cover. It will be Richard making the executive decision that night, his cell is 9254917 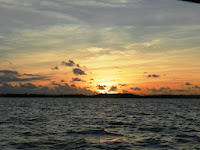 As its Christmas I have decided to upload a modified form of the Astronomy Society Newsletter - now sent to members only. As it only costs 25 CI a year to support the Society its a bargain.The December meeting was not advertised on this Website but we did have a meeting offered by email  to our more keener members and non-members. This our last meeting this year was a particularly pleasant one and involved Clive Bodden’s catamaran “Yahoo Yahoo!” which proved an excellent stable platform to see the night sky somewhere in the North Sound near Booby Cay. It was particularly wonderful to see the WHOLE sky in one go, though when the boat tacked it took a while for everyone’s Apps to synchronize! Myriam produced a wonderful cake to celebrate the occasion including a picture of comet ISON, though of course ISON itself had long gone by then. Myriam also became the trips photographer. 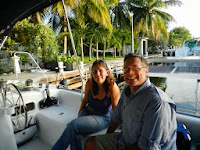 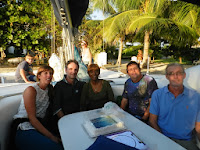 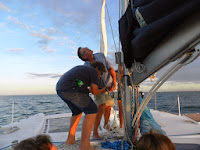 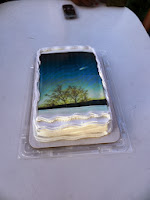 I was going to spend some time reviewing the past year but it’s all there on the Facebook page, Astronomically we had two damp squib-like comets, a very partial eclipse at dawn when it was cloudy and probably the faintest penumbrial lunar eclipse seen for years! (Still, we had a good turnout for the UCCI STEM Conference Astronomy evening)

Next Year
The Society is actually growing with the prospect of a new telescope and a number of events planned already for next year. These include the Cayman Arts Festival “Red Sky At Night” in February – a joint meeting (sometime and somewhere) with The National Trust for viewing and to discuss the ever growing problem of light pollution  If anyone wants to help with raising the profile of the International Campaign for Dark Skies here in Cayman  please contact me. (cpcooke@aol.com)

Ill also be advertising the “Beginners Evening Class in Astronomy” again in early January – to be held at the UCCI Observatory again. This will be the third time its run if we get the numbers. . Both Bill and Richard played a key part in the previous courses and that gives me the opportunity to say thanks for their help. Course is open to all and there’s no math!! More on this early in Jan

Christmas and telescopes : This question is raised every year : What sort of telescope should I buy my  son/daughter/husband/wife/lover/friend for Christmas? It can be a minefield as there's a lot of rubbish around in such bargain shops  such as Cost-U-More and Bad-Buy. Here is a good article to read
http://www.skyandtelescope.com/howto/howtoequipment/3304526.html?page=1

Its a bit technical but one section sums it all up
If you're set on buying new, be prepared to spend at least $200 to $400, and even then you have to be careful to avoid junk. If this is beyond your means, your astronomical aspirations will probably be best served by buying a decent pair of binoculars and a lawn chair. Remember that whatever investment you make should be of good enough quality to serve you well for decades.

Night Sky For December Over Christmas The chart below is produced by the excellent site http://heavens-above.com/  Much thanks to Chris Pete for allowing us to use the chart for our latitudes It shows the sky for Grand Cayman for the 15th of December at around 8:30 PM but is fine for the rest of the month at slightly earlier times . Note that that “Summer Triangle” has now gone and the Great Square of Pegasus (which was overhead on our boat trip) is now distinctly in the West. Jupiter is now high in the sky and in the constellation of the Twins (Gemini).  Its worth mentioning that Venus of course is still blazing in the West just after sunset at the beginning of the month but as December progresses the planet  gets closer and closer into the evening  twilight . Its now showing a real crescent phase through a telescope and worth catching a glimpse if you can

All the best and hope to see you all at our meetings after Christmas. 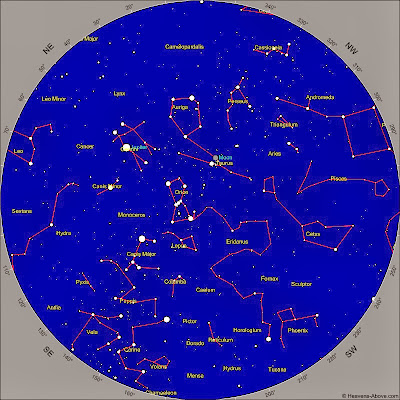