The next meeting will be at Pedro’s Castle starting at 7:15 PM onwards on Thursday 14th March. All are welcome and there is no charge for occasional visitors. Ring or email me if the weather looks bad and you are still intending on coming. Meetings are cancelled if there is more than 50 percent cloud cover.

“Red Sky at Night” on Saturday 23 February was a huge success, we estimated over 500 people visited “Astronomical Avenue” and it looks like we are back for next year too,

At the UCCI Observatory the telescope making course run by Bill finished with some good publicity.  Two of the scopes attended “Red Sky at Night” and performed really well

The “Introduction to Astronomy” course on Tuesday Evenings has one more week to go I write this newsletter .A follow up course at Easter has been promised, but again dependant on numbers. Last night (5th March) whilst outside observing we were all surprised to see a bright meteor-like object cross the sky at around 8:45 PM. The object was very bright and lasted 3-4 seconds. Was this a man-made flare? It was difficult to say – If anyone else saw this object - other than the 15 people attending the course (!) let me know

So let’s move on to what’s going on this month –. Comet Pan-STARRS has been putting on a show south of the Equator but now its orbit takes it into the Northern Hemisphere.  The first easy chance to see the comet will be on March 12th when the comet will be close by a near-new moon or why not come to the Society meeting on the 14th?

Look to the West after sunset- it will not a bright object but with luck will be visible as a smudge in the evening twilight. Binoculars will help but please ensure the sun has safely set.

Those with Internet access go to http://www.skyandtelescope.com/observing/ataglance for a very simplified chart showing its visibility after sunset. The comet should be visible next month too but will be very much fainter.

The name of the comet is interesting. Only a few years ago, comets were discovered by keen amateur astronomers with no more than a pair of good binoculars. More recently – unless the discovery has been a lone non-professional astronomer, the discovery has been named after the telescope, or even more recently by networks of robotic telescopes. Pann-STARRS is such an array based in Hawaii designed to detect near-Earth objects, its funding is mainly from the US Air Force but also includes academic institutions world-wide including the UK and Germany.

Interestingly we have another bright comet later this year – Comet ISON is named after another International network of telescopes – this one is predominantly Russian Federation (is there such a thing?) in funding but with input from other countries such as Switzerland and Spain (ok ,ESA) . Comet ISON will either be spectacle or a damp squib, who remembers Kohoutek?!!

Meanwhile there’s now a third comet which may reach naked eye visibly in April – although much less bright compared to the two already mentioned, it is photographically a very pretty (green) comet. Needless to say comet Lemmon is named after a telescope rather than a person.  However as traditionally comets were the bringers’ of doom and bad news, we should expect some media fall-out soon. For me I’ll quote the old bard Shakespeare himself

“When beggars die there are no comets seen;
the heavens themselves blaze forth the death of princes."

Meanwhile let’s have a quick look at the night sky for around 15th February 8 PM EST as seen from Spotts Beach, Grand Cayman. The chart below comes with the permission of Chris Peat who runs the excellent Heavens’ Above website (http://www.heavens-above.com) it’s also very good for predicting satellite crossings. 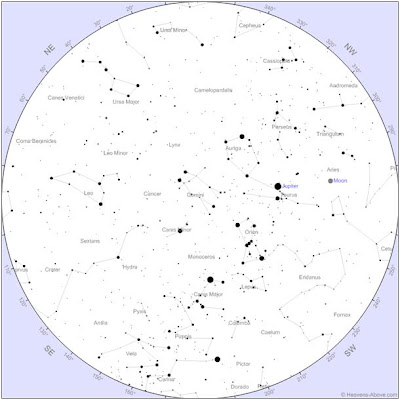 The chart shows Jupiter still high in the sky close to Aldebaran in Taurus the Bull. Orion is still easily visible too.  Look out for Leo (The Lion) rising in the East. Some three hours later at around 11 PM Leo will now be nearly overhead, and at this time it will be majestic Saturn rising in the East.

Society News can happen quickly so also check http://caymanastronews.blogspot.com/ and our Facebook page – although I’ve been so busy writing up the course notes for the Astronomy Class I’ve been neglecting things of late