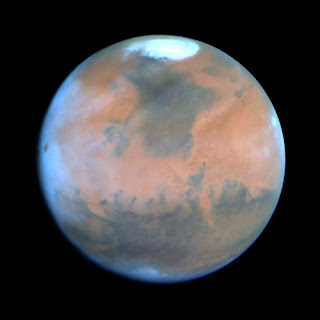 The planet Mars is almost overhead as darkness falls on the
viewing date, very close to one of the brightest stars in our night sky
Regulus, in the constellation of Leo.

Regulus is a multiple star system composed of four stars that are organized into two pairs.
The spectroscopic binary Regulus A consists of a blue-white main-sequence star
and its companion, which has not yet been directly observed, but is probably a
white dwarf star. Located farther away is the pair Regulus B and Regulus C,
which are dim main-sequence stars.
A spectroscopic binary star system is one in which the two components are so close together, or
so far from the Sun, that they cannot be resolved simply by looking at them,
even through a powerful telescope. Their binary nature can, however, be
established because of the Doppler shift of their spectral lines.

The first spectroscopic system to be discovered was Mizar (Zeta Ursae Majoris) in 1889.

Planum Boreum, Mar’s north polar cap, clearly shown in the Hubble image above, contains water
ice “of a very high degree of purity,” according to an international study.
Using radar data from the SHARAD (SHAllow RADar) instrument on board the Mars
Reconnaissance Orbiter (MRO), French researchers say the data point to 95
percent purity in the polar ice cap. The north polar cap is a dome of layered,
icy materials, similar to the large ice caps in Greenland and ,
consisting of layered deposits, with mostly ice and a small amount of dust.
Combined, the north and south polar ice caps are believed to hold the equivalent
of two to three million cubic kilometers (0.47-0.72 million cu. miles) of ice,
making it roughly 100 times more than the total volume of North America’s , which is 22,684 cu. kms (5,439 miles).

Venus will be sinking in the west, close to the crescent moon and the bright star Aldebaran,
which is part of the star cluster of the Hyades, which forms the head of the
Bull, Taurus.

Saturn in the east, and Crux, the Southern Cross in the south are both rising, and next month will
be visible as it gets dark.