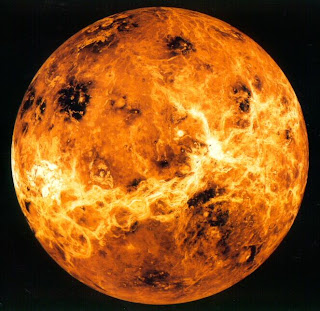 At viewing time, Venus (pictured above), will be close to Jupiter and the crescent Moon, a brilliant conjunction in our early evening sky.
In the 1940's and 50's, the popular image of the surface of the planet was very different to the harsh reality of the image above. 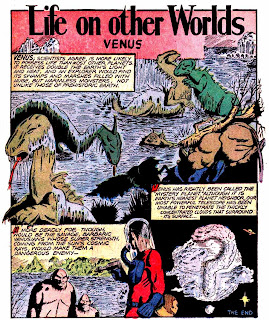 Venus is high and bright in our evening sky, and on the
afternoon of June 5th, will give us, quite literally, the chance of
a lifetime, the opportunity to observe the last transit of the planet across
the face of the Sun for 105 years.

The society is
planning to observe this event, hopefully with a solar telescope, the purchase
of which we are fund raising for at the moment. Any donations welcome. We are
planning a BBQ two days after the March meeting. The meeting is scheduled for
Thursday 22nd March, and the BBQ on Saturday 24th at
Georgetown Villas on 7 mile beach. Details and ticket purchase availability
will be sent later.

Venus rises
especially high and bright in the evening sky every 8 years, this year
included. For every 8 orbits Earth completes around the Sun, Venus completes
13.004.

Late in March,
Venus reaches its greatest elongation, the farthest distance it will be
from the Sun in the sky as seen from Earth. This year the angular distance will
be 46°, or about four-and-a-half fist widths.
The planets orbit the Sun in roughly
the same plane, which means that, if you were to look at the solar system from
the side, the planets’ paths aren’t tilted much compared to each other. Every
year around this time the line drawn in the Northern Hemisphere’s evening sky
by Earth’s orbital plane, called the ecliptic, makes its widest angle with the
horizon, tracing a curve high on the sky. And since the ecliptic is basically
what Venus follows, too, it'll be moving up and down the sky the same way. So,
not only is Venus at its largest angular distance from the Sun, that separation
points nearly straight up.

Venus (named
after the Goddess of Love) is the planet second closest to the Sun, and the
hottest planet in the Solar System. From looking at most of the facts, Venus
initially appears to be very similar to Earth. The reality is, however, very
different. It might be just 652 km thinner, have similar composition, mass and
position, but for a start, Venus' surface temperature is a scorching 484°C,
secondly it is thought to be completely lifeless, and thirdly its surface
pressure is akin to that of an ocean bed (92 times that of Earth at sea level)
- a pressure high enough to pulverize and crush Venus' surface rocks.

All of these major
features stem from one key difference to the Earth - Venus has no water. This
explain Venus' very dense (mainly Carbon Dioxide) atmosphere - here on Earth
the water of the oceans removes CO2 from our atmosphere and keeps
our planet in a state such that we can live on it (in fact the same quantity of
Carbon Dioxide has come out of the Earth's interior as is in Venus'
atmosphere!). In Venus however there is no water to absorb the CO2
and so the atmosphere thickens and produces a runaway greenhouse effect, so the
rays (and heat) of the Sun shine onto the planet and are then trapped there by
the dense atmosphere. In fact, it is very likely that at one point Venus did
have water on it, but because Venus is about 50 million km closer to the Sun
than the Earth is (two thirds of the way between the Sun and Earth) any
remnants of this water have long since evaporated.

Venus' thick
atmosphere makes it very hard for us to see the actual surface of the planet.
The first ideas of what the planet may look like came in the 1960s when we were
able to see through the clouds, albeit in quite a primitive fashion, with radar
imaging from ground-based telescopes. However, global scale radar mapping of Venus'
surface did not start until the Pioneer space probe arrived at Venus in
1978-80, and mapped many of its basic surface features. These were followed by
the Soviet Veneras 15 and 16 but it wasn't really until the Magellan Orbiter
arrived in 1992 that we really got a good idea of what Venus was like.

When the data from
the Magellan mission did come through though, it surprised many scientists, as
there were only a tenth the amount of craters that would be expected had Venus
been as old as we thought it was, and the ones which were there were all found
to be relatively fresh. There are now two theories for this - one is that
volcanic eruptions destroy craters as fast as they are made so there will
always be a constant number of craters on Venus, and the other is that 500
million years or so ago, volcanic eruptions resurfaced the planet, destroying
all previous craters. Another thing these space probes found was that at least
85% of Venus is covered by volcanic rock. These are mostly from lava flows and
form the planet's vast plains.

Venus is
unmistakable in the evening sky, so look up and enjoy.

Good morning how are you?
My name is Emilio, I am a Spanish boy and I live in a town near to Madrid. I am a very interested person in knowing things so different as the culture, the way of life of the inhabitants of our planet, the fauna, the flora, and the landscapes of all the countries of the world etc. in summary, I am a person that enjoys traveling, learning and respecting people's diversity from all over the world.
I would love to travel and meet in person all the aspects above mentioned, but unfortunately as this is very expensive and my purchasing power is quite small, so I devised a way to travel with the imagination in every corner of our planet. A few years ago I started a collection of used stamps because trough them, you can see pictures about fauna, flora, monuments, landscapes etc. from all the countries. As every day is more and more difficult to get stamps, some years ago I started a new collection in order to get traditional letters addressed to me in which my goal was to get at least 1 letter from each country in the world. This modest goal is feasible to reach in the most part of countries, but unfortunately it’s impossible to achieve in other various territories for several reasons, either because they are countries at war, either because they are countries with extreme poverty or because for whatever reason the postal system is not functioning properly.
For all this I would ask you one small favour:
Would you be so kind as to send me a letter by traditional mail from Cayman Islands? I understand perfectly that you think that your blog is not the appropriate place to ask this, and even, is very probably that you ignore my letter, but I would call your attention to the difficulty involved in getting a letter from that country, and also I don’t know anyone neither where to write in Cayman Islands in order to increase my collection. a letter for me is like a little souvenir, like if I have had visited that territory with my imagination and at same time, the arrival of the letters from a country is a sign of peace and normality and an original way to promote a country in the world. My postal address is the following one:
Emilio Fernandez Esteban
Avenida Juan de la Cierva, 44
28903 Getafe (Madrid)
Spain
If you wish, you can visit my blog www.cartasenmibuzon.blogspot.com where you can see the pictures of all the letters that I have received from whole World.
Finally I would like to thank the attention given to this letter, and whether you can help me or not, I send my best wishes for peace, health and happiness for you, your family and all your dear beings.