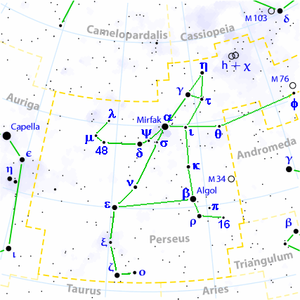 The constellation Perseus is in the northern half of the sky, neighbouring the distinctive asterisms that are Cassiopeia, Auriga and Taurus.
It was one of the 48 constellations listed by the 2nd century astronomer Ptolemy, and remains one of the 88 modern constellations defined by the International Astronomical Union. It contains the famous variable star Algol (β Per), and is also the location of the radiant of the annual Perseids meteor shower.
The brightest star of this constellation is also called Algenib (a name which is used for other stars as well, e. g. γ Peg). Mirfak (Arabic for elbow) is a supergiant of spectral type F5 Ib with an apparent brightness of 1.79m lying at a distance of ca. 590 light-years. Its luminosity is 5,000 times and its diameter is 42 times that of our sun.
One of the brightest and most interesting stars in Perseus is Algol. The name Algol means "demon star." Ancient skywatchers thought it was cursed because its brightness changes. That's because Algol — which is about 75 light-years from Earth — is the most famous "eclipsing binary" star. Today, astronomers know that Algol is two separate stars. About once every three days, the fainter member of the pair passes in front of the brighter one, and Algol grows fainter. 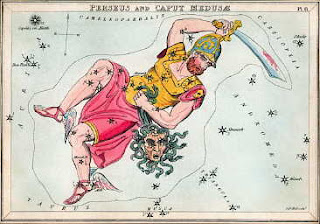 Perseus was a Greek hero most famous for his slaying of Medusa. If anyone looked at Medusa's face they would turn to stone. With the help of Hermes' wings and Athena's shield, Perseus killed Medusa without looking at her. On his way home, Perseus came across the monster, Cetus, getting ready to eat Andromeda. Perseus used Medusa's head to turn Cetus into stone and saved the princess.
With a little imagination, you can see the image of a man in the stars. He has a sort of triangular body, with two legs and feet that look like they are curling up towards the head. There are also two arms stretching out, possibly carrying some sort of weapon or the head of Medusa.
To the south in the sky, Jupiter is the brightest object, with the bright, unmistakable pattern of Orion rising in the east.
Posted by ndkelly55