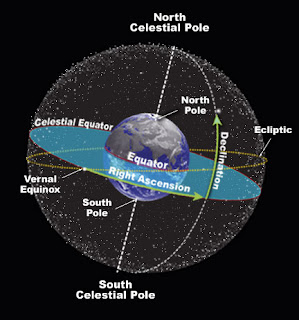 The sky is brilliant in the early evenings this month with three planets and bright stars along the line of the ecliptic.
The ecliptic is the apparent path that the Sun traces out in the sky during the year, appearing to move eastwards on an imaginary spherical surface, the celestial sphere, relative to the (almost) fixed stars.
In astronomy and navigation, the celestial sphere is an imaginary sphere of arbitrarily large radius, concentric with the Earth and rotating upon the same axis. All objects in the sky can be thought of as projected upon the celestial sphere. Projected upward from Earth's equator and poles are the celestial equator and the celestial poles.
Most planets go in orbits around the sun, which are almost in the same plane as the Earth's orbital plane, differing by a few degrees at most. As such they always appear close to the ecliptic when seen in the sky.
The name ecliptic arises because eclipses occur when the full or new Moon is very close to this path of the Sun.

On the 16th, Venus will be close to the crescent Moon in the west. Moving eastwards along the ecliptic, the Twins of Gemini, Castor and Pollux, come before Mars.
Saturn is roughly halfway between Regulus, in the constellation Leo, and Spica, α Virginis.
The distinctive constellation of Ursa Major is high in the north, and Crux, the Southern Cross is in the south.

Hello I was just wondering if anyone will be meeting to see the Perseid shower this year.