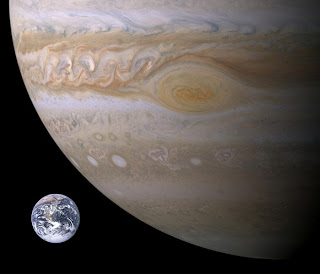 In Capricornus, the planet Jupiter outshines all the faint stars in what is the second faintest constellation in the zodiac after Cancer.

The illustration above is approximate size comparison of Earth and Jupiter, including the Great Red Spot. The Great Red Spot, a persistent anticyclonic storm located 22° south of the equator is larger than Earth. It is known to have been in existence since at least 1831, and possibly since 1665. Mathematical models suggest that the storm is stable and may be a permanent feature of the planet. The storm is large enough to be visible through Earth-based telescopes with an aperture of 12 cm or larger.

The oval object rotates counterclockwise, with a period of about six days. The Great Red Spot's dimensions are 24–40,000 km × 12–14,000 km. It is large enough to contain two or three planets of Earth's diameter.

Jupiter is the fifth planet from the Sun and the largest planet within the System. It is a gas giant with a mass slightly less than one-thousandth that of the Sun but is two and a half times the mass of all of the other planets in our Solar System combined. Jupiter is classified as a gas giant along with Saturn, Uranus and Neptune. Together, these four planets are sometimes referred to as the Jovian planets.

The planet was known by astronomers of ancient times and was associated with the mythology and religious beliefs of many cultures. The Romans named the planet after the Roman god Jupiter. When viewed from Earth, Jupiter can reach an apparent magnitude of −2.8, making it on average the third-brightest object in the night sky after the Moon and Venus. (Mars can briefly exceed Jupiter's brightness at certain points in its orbit.)

Jupiter is primarily composed of hydrogen with a quarter of its mass being helium; it may also have a rocky core of heavier elements. Because of its rapid rotation, Jupiter's shape is that of an oblate spheroid (it possesses a slight but noticeable bulge around the equator). The outer atmosphere is visibly segregated into several bands at different latitudes, resulting in turbulence and storms along their interacting boundaries. A prominent result is the Great Red Spot. Surrounding the planet is a faint planetary ring system and a powerful magnetosphere. There are also at least 63 moons, including the four large moons called the Galilean moons that were first discovered by Galileo Galilei in 1610. Ganymede, the largest of these moons, has a diameter greater than that of the planet Mercury.

The planet has been explored on several occasions by robotic spacecraft, most notably during the early Pioneer and Voyager flyby missions and later by the Galileo orbiter. The most recent probe to visit Jupiter was the Pluto-bound New Horizons spacecraft in late February 2007. The probe used the gravity from Jupiter to increase its speed. Future targets for exploration in the Jovian system include the possible ice-covered liquid ocean on the moon Europa.

Jupiter has been called the Solar System's vacuum cleaner because of its immense gravity well and location near the inner Solar System. It receives the most frequent comet impacts of the Solar System's planets. It was thought that the planet served to partially shield the inner system from cometary bombardment. However, recent computer simulations suggest that Jupiter doesn't cause a net decrease in the number of comets that pass through the inner Solar System, as its gravity perturbs their orbits inward in roughly the same numbers that it accretes or ejects them. This topic remains controversial among current astronomers, as some believe it draws comets towards Earth from the Kuiper Belt while others believe that Jupiter protects Earth from the alleged Oort Cloud.

A 1997 survey of historical astronomical drawings suggested that the astronomer Cassini may have recorded an impact scar in 1690. During the period July 16, 1994 to July 22, 1994, over 20 fragments from the comet Shoemaker-Levy 9 collided with Jupiter's southern hemisphere, providing the first direct observation of a collision between two Solar System objects. This impact provided useful data on the composition of Jupiter's atmosphere.

On July 19, 2009, an impact site was discovered at approximately 216 degrees longitude in System 2. This impact left behind a black spot in Jupiter's atmosphere, similar in size to Oval BA. Infrared observation showed a bright spot where the impact took place, meaning the impact warmed up the lower atmosphere in the area near Jupiter's south pole.